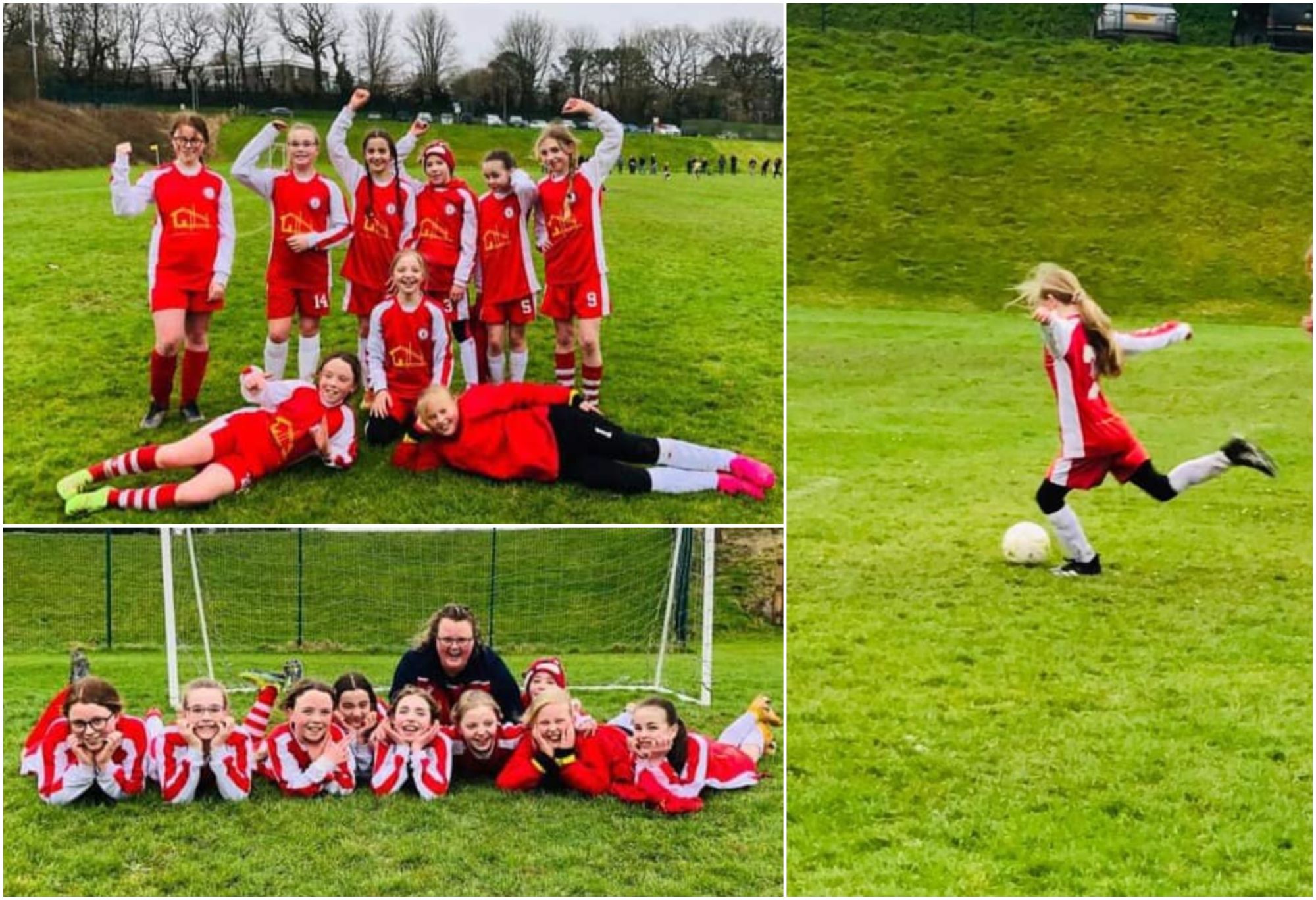 Today saw a cold, wet and windy away match to Bodmin in the second round of the cup. From the first whistle Newquay were on top form and straight in. Within the first five minutes some precise passing set up the perfect ball for Kacey who took a great shot and scored her first of the match. For the first half Newquay kept the ball in Bodmin’s half and gave the away team a hard time. The game today showcased the girls development of passing and running with the ball and showed how far they’ve come as a team.

Charley in goal didn’t have much to do in the first half but some great communication and encouragement for her team seen her kept busy. The second goal came from Freya with a great strike from outside of the box. Bodmin managed to get a run down the wing but were soon stopped by a great defensive tackle from Mary-Jane who passed a perfect ball through to Sinead who ran with the ball and perfected her strike towards goal.
Today seen some of Newquay’s best passing, tackling and dribbling and this ensured they had the upper hand in the match. Niamh was fantastic the whole game with precision passing, hard tackles and dedication to ensure she bagged herself a goal. Mary-Jane was a brilliant midfielder and her tackling was on point, she played her best game yet and secured herself two goals with some incredible turning and dribbling and striking.
Newquay were lucky enough to be awarded a few corners and these were executed with precision with Niamh taking her third corner of the game and curling it up and around the back of the Goalie who didn’t see it coming. The shock on Niamh’s face had everyone laughing.

Bodmin kept their heads up and made some great tackles so Newquay had to work hard, a fantastic Goalie kick from Charley seen Chloe control the ball and a little pass on to Lola who controlled the ball and passed between two defenders found Kacey who slotted the ball home.
The second half seen Newquay in a comfortable position so the coach found a perfect opportunity to switch the girls positions around and try something new. With Kacey in goal and Charley defending we found Phoebe as striker, she made some perfect passes and found her teammates accurately a one-two with Mary-Jane found the ball heading back to Phoebe who was positioned at the edge of the box to strike the ball perfectly on target. Her first of the match and her first goal for Newquay AFC Youth Girls U12.

With the shake up of positions for the girls it gave Chloe who is a natural defender a chance to shine as midfielder and she delivered. Her confidence on the pitch shone through, her passing and tackling were amazing and she was almost rewarded with a goal, she didn’t give up and a perfect strike seen the ball just edge wide, but she never gave up and was always smiling.

Bodmin started to tire and Newquay took advantage of this by passing around the opposition the ball came out wide to Freya who struck the ball and curled it perfectly into the top right corner, the shock and look on her face said it all, she was as shocked as the rest of us but what a fantastic goal it was!

With the game coming to an end the girls never gave up and played fantastically, their dedication and precise passing seen them rewarded with another goal from Freya giving her a well deserved hat trick after a short break this was her first match back. Lola played amazing in midfield and defence and played some perfect balls through and helped set up some of her teammates goals, she never gave up and was solid with her tackling. She even had a stint in goal however her defenders Sinead and Charley made sure she had nothing to do.

Our next match sees a friendly at home on the astro at Newquay Tretherras School on Saturday 19th February against Plymouth Argle U12 Rep. Kick off is 11:15am and it would be great to see some support for the girls.